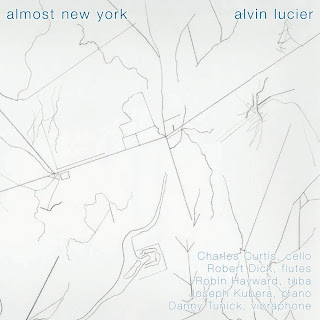 What I wrote in yesterday's blog about diatonic asymmetry/ritual melodics holds true for today's album of music by Alvin Lucier, Almost New York (Pogus 21057-2). On a 2-CD set there are four instrumental chamber works. Disk 1 has "Twonings" for cello and piano, the title piece for multiple flutes, and "Broken Line" for flute, vibraphone and piano. The second disk is occupied by a seven-part composition for tuba solo, "Coda Variations."

Alvin Lucier's mature instrumental compositions tend to be deceptively simple. On repeated hearings music that seems at first based on somewhat slender means opens up and you begin to focus on the sheer acoustic properties of the tones.

"Twonings" (2006) consists of unison notes played in equal temperament on piano, with the same notes played as harmonics in just intonation on cello. The music is in the form of whole notes, i.e. fairly long tones, in particular diatonic sequences (asymmetric) and occasional added chromatic tones. The difference in tunings of the two instruments causes pulsings, beatings and other fascinating acoustic resonances. It is a sort of ritual music--simple on the surface, inwardly complex as psychological listening experience.

"Almost New York" (2001) features five flutes played by one player. Two sine wave oscillators slowly sweep the sonic spectrum while the flautist plays long single notes to complement various places in the oscillator's path--on contrabass, bass, alto, flute and piccolo in turn. In is a simple landscape yet holds forth for the sympathetic listener the more he or she listens.

"Broken Line"(2006) pits flute glissandi against long-toned fixed pitches on piano and vibraphone. The flute audibly beats against the fixed pitches as it nears or strays from concert tones.

"Coda Variation" (2005) is for six-valve tuba in just intonation. Eight tones, derived from Morton Feldman's "Durations 3," are subject to numerous permutations, tunings microtonally above or below concert pitch by a specific degree. The long notes expand your sense of pitch by slowly unfolding, revealing the world of pitches between pitches.

All the pieces need to be heard with concentration, to allow the subtleties and ritualized simple-complex expansiveness to show itself.

The instrumentalists are an object in focused execution. In the end you enter a compositional world that is Lucier's own, unrelenting in its ritual sensuousness yet austere matter-of-factness. Some may find the insistent suchness of this music off-putting. Others will ultimately bask in its forthright presence.

An important example of Lucier's later work. If you are game, receptive to the premises, the set offers rewards like few other musics do. It's probably not for those that seek exciting, quickly satisfying mercurial sounds! Like watching a pot boil, patience is necessary for these works. Intent concentration opens up universes for the serious listener.