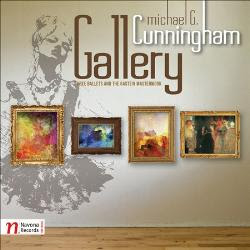 Back when the world was younger and there were no CDs, downloads, wax cylinders or 33.3 RPM LPs, new music had to be heard in person, imagined/constructed in the mind or on the keyboard while examining a score, or dreamed about in some nether world we may never reach. Today it's much easier but that means in my case there may be 30 new composers, new works or at least new performances that reach my desk every week and it's up to me to decide what to cover and then what to say.

I am not complaining. It is a position that has its privileges but at the moment no tangible rewards. Still it gives me the chance to hear much music and that brings me joy. Today, for example, we have the composer Michael G. Cunningham and four of his orchestral works on the CD Gallery: Three Ballets and the Gastein Masterwork (Navona 5893).

What we have are quite reasonable run-throughs of works that have both movement and matter, substance and rhythmic propulsion. The three ballets, "Nyadina," "She" and "Chrysalis at Mardi Gras," have a kind of post-Stravinskian choreographability. They are modern sounding without entering avant garde territory, rich in musical imagery and good listening.

The final work in the program, "Gastein Masterwork," reaches in many ways that nether world of musical imagination that I alluded to earlier. It's termed in the press sheet that came with the CD "a 'prediction' of Schubert's lost work." And as such gives us a four-movement work in the classical Schubertian idiom, with a definite charm and forthright straightforwardness that Schubert himself might find appealing.

That in a nutshell is the music of Michael G. Cunningham as heard on the disk. He is a talent and the music is quite enjoyable.