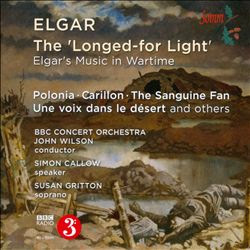 Edward Elgar has a rather undeserved reputation as a stuffy composer. The obvious "Pomp and Circumstances" and high-school graduations of course come to mind, but there is much more to him than that. Listen to his "Dream of Gerontius," his symphonies, and you will get a different picture.

He of course was England's first important modern-day composer, a Romantic who wrote worthwhile music and the man who made possible the Anglo Renaissance of Vaughn-Williams, Tippet, Britten and the rest.

Today we look at a recent volume of lesser-known orchestral works that came about as his reaction to the multivalent bleakness of World War I. The Longed-for Light (Somm 247) covers nine works of short-to-medium length, each sufficient within itself but providing a cohesive program when taken in tandem.

John Wilson conducts the BBC Concert Orchestra in honest, resplendent readings of the works, some of which include a soprano part well-sung by Susan Gritton, some which incorporate the wartime poetry of Belgium resident Emile Cammaerts, that highlight speaker/orator Simon Callow in the dramatic role.

These are works not just of stirring feelings, of steeled resignation (there are a few where that is out-front) but also of sorrow, regret and introspection.

Throughout Elgar's soaring lyricism and orchestrational prowess is well on display. John Wilson's versions are completely idiomatic and movingly captivating.

This may not be the first Elgar you should get, but it is a welcome addition to anyone who wishes to know the composer in greater depth.

And in a time when the wars seem never-ending, it provides suitable music for rumination.

Posted by Grego Applegate Edwards at 4:15 AM