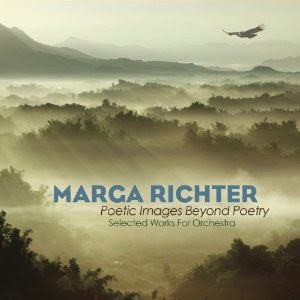 Marga Richter, some time in the fifties, was off to a great start. A good number of her compositions were being recorded by the now long-defunct MGM Classical Records Division. Then what happened? All I know is that by the time I found many of those recordings in a used record store, she was a name I did not know at all. And yet the recordings showed a budding modern figure, a woman no less, with good ideas and a poetic sense of form.

I was forced to sell most of those recordings before I moved to my present location, but I missed them almost immediately.

Now we have an entire disk devoted to three orchestral works that date from the '70s, conducted by Gerard Schwarz, Poetic Images Beyond Poetry (Ravello 7867). They are the premiere recordings. And they show her mid-later period in a bright light.

The compositions have a high level of expressivity, an easy familiarity with the orchestra and an even brilliance of orchestration. "Out of the Shadows and Solitude" has a kind of dash to it. "Quantum Quirks of a Quick Quaint Quark" is a short piece, which serves as a good prelude to the half-hour "Spectral Chimes/Enshrouded Hills", which is in many ways the centerpiece of the set.

There is a very chromatic strain present in the works, especially the latter, where insistent minor second intervalic melodies form the central organizing motives.

It's a somber music, expressively and orchestrationally almost neo-romantic but harmonically quite modern. I am sometimes reminded of the music of Allan Pettersson, whose scores often had a quality of angst, even despair. But Ms. Richter's own vision shines through her later music nonetheless.

This is music of a very serious caste. It is broad and sweeping, very personal, and in its own way, brilliant. It sounds out the listeners today like a series of poems by Sylvia Plath or John Berryman, very articulate and very much of a complex mood. She is her own original self. Whether this is music you will like depends on what kind of person you are, I believe. There is a dark quality to it that stays in the mind long after the music has ended. She is a voice that should be heard.

I hope this recording opens the way to more performances and recordings of her works. I am keen to hear them in any case.

Posted by Grego Applegate Edwards at 6:06 AM