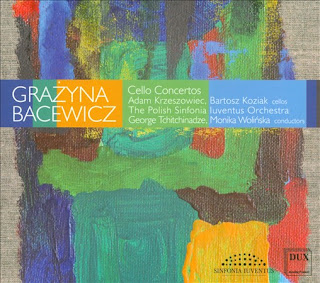 Logical sequence, resurgence or mere serendipity can bring a composer into your listening life. In the case of Grazyna Bacewicz (1909-1967) there were several years in the '90s when I was privy to a press pass for the New York Philharmonic season under Kurt Masur, since I covered much of what was going on at Lincoln Center for a Delta Air Lines publication.

I suppose that Bacewicz's music at the time was enjoying more exposure among audiences than previously here in the States but it was pure chance that her music appeared on the program I attended one Sunday afternoon. I perked up at the performance, being in general a follower of the Polish and Eastern European symphonic modern situation. The piece impressed me. One thing led to another and I found myself seeking out more of her music. Fifteen years later and the seeking continues.

So today we have a CD of her two Cello Concertos (Dux 0591), along with a brief Overture from 1943 to fill out the disk and prefigure the music to follow.

The Polish Sinfonia Luventus Orchestra performs decently throughout the entire disk. The two concertos are separated pretty widely in time and style. The first comes out of 1951 and is in a kind of eastern neo-classicist, rather exuberant modernism. For this work Adam Krzeszowiec is the capable soloist, George Tchitchinadze conducts. It is a work of charm and persuasive straightforwardness, with the allegro finale having a lilting jauntiness that readily grabs one.

For the second concerto we move in time and style to 1963. This is full-fledged modernism with dramatic sturm und drang cello that Lutoslawski and Penderecki would have appreciated. Bartosz Koziac takes on the dynamic, difficult part with heroic bravado; Monika Wolinska conducts and inspires an authoritative, passionate precision from the orchestra.

Of the two works, the second is a fair deal more enchanting and singular. By then she had found a voice and expressed a deeper range of feelings and ideas. It's high modernism with her own spin. The earlier work is engaging and good listening, but it is not quite as profound as the second concerto, nor was it meant to be.

Put the two together with these quite respectable, seriously competitive performances and you have a very good introduction to Bacewicz's music over time. If you are like me it will give you the impulse to explore the rest of her opus. She does not disappoint, I've found. Recommended.