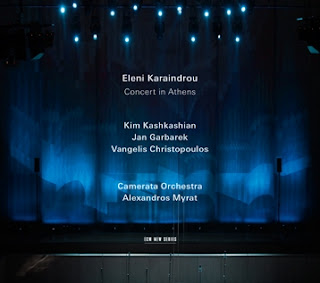 ECM was instrumental in many ways from the beginning of the '70s on in fostering a music that had a particular identity. The music that fitted into this category tended to be mellow, spacious, tonally direct and generally less aggressive than the more overtly avant jazz being made during the '60s and '70s. One of the side effects of their all-embracing presence among the music world is that they inadvertantly spawned a rather vapid, principally watered-down category of music known as New Age. ECM dealt in artists, composers and improvisors of a high caliber; New Age was home to eager but less artistically adept musicians for the most part. The results were a kind of new middle-of-the-road sound for aging hippies that was not usually very contentful musically.

Undaunted, as time went on ECM continued to produce high quality music. It began turning in addition to their brand of jazz, modern and early classical composers, especially those who favored an ambiance that complemented the sort of jazz ECM was known for. The ECM New Series was the outcome of this endeavor and it's been producing some wonderful recordings, generally speaking, ever since.

One of the artists that became associated with the label at that time was Greek composer Eleni Karaindrou. She created music that was very accessible, melodic, lyric, spatially encompassing and sounded well in the ambient ECM production style.

Flash forward to today and her 10th release for the label, Concert in Athens (ECM New Series). It is in some ways a retrospective affair with reprises of the film scores "The Beekeeper" (with Jan Garbarek on tenor solo) and "Ulyssey's Gaze," featuring violist Kim Kashkashian. But it combines old familiar works with others not yet available on disk, with an emphasis on music for the theater.

The Camerata Friends of Music Orchestra under Alexandros Myrat take on the task of executing the scores with imagination and a lush, resonant spirit.

Karaindrou is well served by the concert performance and the listener gets a very good sampling of her style. It is ravishing music that will charm those who respond to music that caresses the weary soul. Compared to an Arvo Part this is music that has more of a featherweight gossamered romantic quality much of the time. It is not inclined to a profound seriousness so much as it soars in rhapsodic effulgence. It is ECM music in many ways, ideally suited to Manfred Eichner's sonic landscaping.

If you do not know her music, this is a very good place to start.