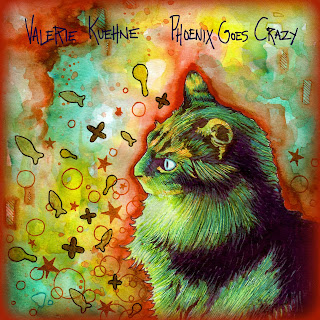 There are some albums that are just so unusual that not only is there no convenient peg to hang them on, the music absolutely refuses to be pegged at all. Valerie Kuehne's Dream Zoo EP Phoenix Goes Crazy (Self Released) is most definitely such. It's a gathering of b-sides, obscurities and unreleased material. Valerie commands attention on cello, vocals and composition-concepts, with the effective collaboration of Dream Zoo chamber-improv participants in varying strength of numbers depending on the piece.

The music singularly combines aspects of new music/classical, improvisation, song form and a hint of rock, all with an avant slant. Some are story songs, some are overtly funny, some off color, some give you a big horse-laugh, all are unpredictable.

The songs to me have the most tensile strength of all the material. Her eccentric vocals are one-of-a-kind and inimitable. I also liked the free-gypsy chamber piece and perked up at her at times rather intense cello expressions. Most certainly they complement well her over-the-top, lieder-gone-wild dramatics.

There's a story set to musical accompaniment about an abusive clown that will make you laugh. There is also a group dialog number that involves collaged discussions of what members might want to eat for their "last supper." That one does seem to go on a bit and tends more toward the extra-musical than the musical. Like a comedy routine, there is a saturation point after which the hearing of it provides diminishing returns. But of course since it's the last number it can easily be played or not in future hearings.

The rest is an extension of the last album (see February 20, 2012 posting on this blog)--original, wacky, downtown, shredded romantic excess proffered with a great good humor. The dialog piece lasts 13 minutes. The remaining material gives you a good album side of Valerie's unusual musically focused post-mannerisms.

There's no mistaking this music for another. It's very original--so much so that some might be put off. Avantists and those who like outside-the-center lunchables with unexpected ingredients will get something good of it, as I did.

You can find out more and grab a download at http://dreamzoo.bandcamp.com/.

Posted by Grego Applegate Edwards at 1:11 AM