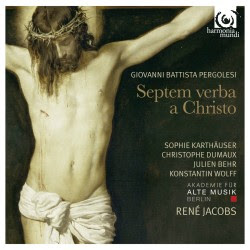 Giovanni Baptista Pergolesi (1710-1736) lived a short life and did not leave us a huge body of works. One that was destined to be forgotten for hundreds of years is the Septem verba a Christo (Seven Last Words of Christ), manuscripts of which were discovered from various monasteries and in various states of incompleteness between 1888 and the discovery by Hermann Scherchen of a set of complete parts in the 1950s. A new critical edition of the work has recently been published and the Akademie für Alte Musik Berlin under René Jacobs has newly recorded the definitive version, just out this month (Harmonia Mundi 902155).

The performance runs a full 80 minutes and if you listen even just once you know that a major Baroque masterpiece has finally been fully realized. This is a mature, very lyrical and gravely dramatic work, with vocal parts for Soprano (Sophie Karthäuser), Countertenor (Christophe Dumaux), Tenor (Julien Behr), and Bass (in the role of Christ) (Konstantin Wolff). A period orchestra of trumpet, two horns, harp, strings, and basso continuo are called for as well.

Jacobs, the soloists and the Akademie für Alte Musik Berlin give us a glorious reading, with the attention to period detail we have come to expect from the ensemble and for this work an especially dramatic brio.

It is a very moving experience to hear this forgotten gem in its full-flowered version. The music is outstanding and will undoubtedly give joy to all who appreciate the era. Highly recommended.

Posted by Grego Applegate Edwards at 1:41 AM