Michael Mauldin, The Last Musicians of UR, CD Single 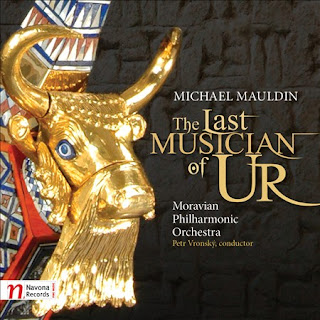 When something works for you musically, it emanates with a feeling of inner satisfaction. Some folks just affirm that feeling and go on. Reviewers have to ask themselves why.

The satisfaction in my case is about Michael Mauldin's The Last Musician of UR (Navona 5891), as performed by the Moravian Philharmonic under Petr Vronsky. It's a seven-minute work and the disk that results is a CD single of short duration.

There's a back story to the music. Ten years ago looters damaged the Gold Lyre of UR, said to be the oldest stringed instrument extant, while plummeting the Iraq Museum in Baghdad. Andrew Lowings, an English harpist, set about to recreate a working version.

The ensuing orchestral work has, understandably, a prominent harp part which is quite lovely. The work itself is in the best sort of "tonal exotica" mode. One of the impressionists might have written it--or Hovhaness, even more so.

It's a beautiful little work. The list price on this baby is $2.99 and I think you'll find it well worth your coinage for the pleasure it brings. Mauldin did something you should hear!