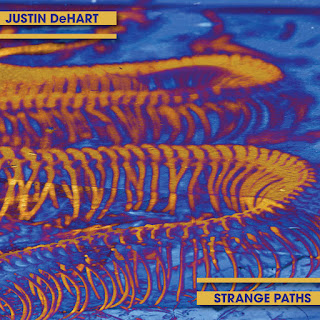 In the past 100 years we have seen the rise of percussion instruments as equal contenders for musical attention in contemporary classical music. No longer do the strings, winds, and brass have a monopoly on musical eloquence. Of course the piano has been a critical instrument since its beginnings. But nowadays percussion ensembles, large percussion sections in orchestras and solo percussion works have become relatively frequent occurrences.

It is to the latter of the three possibilities that we turn today, to percussionist Justin DeHart's solo percussion recital disk, Strange Paths (Innova 849). Four works are featured, each with its own sound and way of proceeding.

Michael Gordon's "XV" (1998) features a set of tuned tom toms sounded in a series of contrasting velocities occurring simultaneously, weaving in and out of the matrix, and receiving accents intermittently to bring forward a given tom tone and velocity. It's an exercise in polyrhythmic density but in an ever-evolving steady-state that has minimalist overall coverage more than an African central fulcrum tempo. Partially because of the nature of the sound of the toms but also because of the tendency for patterns to interlock, it is in the lineage of Steve Reich seminal work Drumming, though a distant and autonomous relative, so to say.

Iannis Xenakis's "Psappha" (1975) makes pulsating but very much more differentiated use of toms and a bass drum, and what sounds like an African xylophone. As with many of Xenakis's works, there are zones of varying motives (and timbre families) that enter and exit periodically, in this case evolving into an ever more sparsely populated universe. Bell-tree chimes and other resonant metallic objects make their appearance towards the end, at the same time the dynamics and density change back to a more urgent and populous soundscape, concluding with a relatively climactic thrust of sound. This is bracing music!

Brian Ferneyhough's "Bone Alphabet" (1992) apparently follows with the same instrumentation and a different, more expressively accentuated overall series of many timbred phrases, becoming something like a linear piece for prepared piano, only each sound of course gets generated by either a separate instrument or pitch of an instrument. There are choices to be made by the soloist at every turn, so that every performance will sound differently. This one sounds very good indeed.

The recital concludes with a four-part work for vibraphone, Stuart Saunders Smith's "They Looked Like Strangers" (2009). It is a complex melodically-harmonically rich piece that has an improvisational/fantasia sort of feel to it. It is not an easy piece to play in parts; it has a piano-solo-like feel to it in terms of phrasing and trajectory. This work to me though quite pleasant to hear, is of lesser interest than the more dynamic preceding works. But perhaps that is only to say that it demands more of your undivided attention and requires a greater attentiveness to the various musico-syntactic continuities. The vibes have developed such a strong tradition in modern jazz that I might be a little spoiled by some of the innovating improvisers active and/or admired today, from Bobby Hutcherson on. Nevertheless this is music that has its say and does have something to say.

In the end Maestro DeHart shows great musicality, technical ability and a devotion to realizing each work with care and dramatic verve. It is a varied program that encapsulates the tendencies in solo percussion from the '70s onwards. It is also a most interesting and rewarding listen.