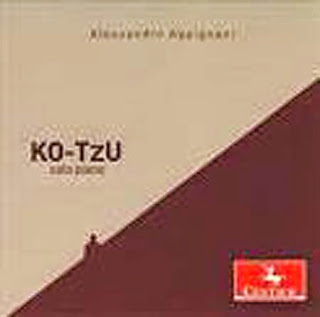 Alessandro Appignani, composer and pianist, embodies a new music ethos that embraces polystylism. Mathematics, mysticism and philosophy influence his musical concerns. A rather lengthy 2-CD set of his piano music has come out, called Ko-Tzu (Centaur 3304-3305). It is a live recording of a private concert he gave with himself on piano, giving us an impromptu look at the workings of his musical mind.

How much is pre-composed in the eight-segment concert and how much improvised I am not sure. The music does have a spontaneous feel to it but of course he may have had and no doubt did have at least some kind of mental template for where he was going throughout.

There are times when there seems a genetic connection with the piano improvisations of Cecil Taylor--mostly when Appignani seeks to realize a flat-out expressiveness born of clusters and rumbling cascando motifs. At other times the music grows less dense and relates more to a sort of post-Scriabin consonant-dissonant set of contrasts using techniques of late-romantic pianism but not engaging in concrete theme-weaving. Still other times he plays around with small sets of intervalic relations, mostly of a consonant sort.

The two full CDs engage the listener in a good deal of music and it is probably best to approach the music with some breaks in between, as I did.

Followers of free avant "jazz" will find themselves in territory at once familiar but also unexpected. The same would apply to those familiar with avant new music for solo piano.

One might go so far as to say that there is almost too much here. However the moment you start feeling satiated Appignani changes it all up and gives us some genuinely contrasting explorations.

One can appreciate something without embracing it and wearing it like a comfortable pair of jeans. At this point that is where I am with this music. After ten listens I may feel such things about this music. I am not there yet. The breadth of it all challenges the listener to open to it all, but at the same time the bearings one might get with repetition do not come about quickly. That may be saying something profoundly positive about this music. Or it might be saying, "yes it is interesting but...." I am not there yet on either side. That is neither a recommendation exactly, or a declaration on inessentiality.

It surely makes me want to hear other music he has done. And the pianist somewhere inside of me responds with approval and encouragement. The analytic, structural me remains open but hasn't been convinced. That may be a good sign, an indication that the structure is there in such new ways that it takes much time to assimilate. In any rate those who want some freely rubatoed rubato will engage and want to understand. Hear and decide for yourself.