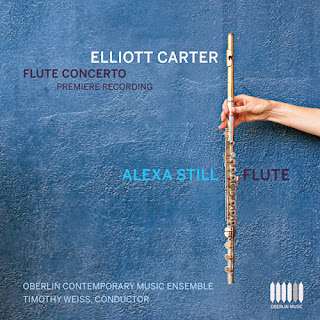 Elliott Carter was one of America's greatest composers of the last half of the twentieth century. He lived a long while, which happily translates into a body of works the full breadth of which we are still unravelling.

That he was the absolute master of abstract, late high modernism means that he may never be a household name out there, perhaps. But it does mean that all his later works bear our close attention, if we take modern music seriously.

What's true of Carter is true of many of the high-modern masters. That is that it takes more than the average number of listens to wrap yourself around the terrain of a particular work. The music must be heard beyond your initial intuitive level to be understood, because the musical language is most certainly not vernacular, but rather developed to a state beyond which you normally dwell. The rewards are great, however.

So today we get to hear a previously unrecorded composition, his Concerto for Flute (Oberlin Music), a 14-minute work performed ably by Alexa Still and the Oberlin Contemporary Music Ensemble, Timothy Weiss conducting. The ensemble appears here in the form of a fairly large chamber orchestra. The recording is available as a download only.

One of the pitfalls of such downloads can be the assumption that like a pop fan, you care little about what you are downloading, you just want a song and who cares for the rest! That is not entirely true across the board on various sites, but it's close enough to it that most download sites are insultingly absent on details. So here on itunes.

It has very punctuated parts for the orchestra at times and a soaring flute part that Ms. Still handles wonderfully. The orchestra has a razor-sharp execution. Well rehearsed and confident, all participants make this an event, an occasion, a celebration of Carter.

If you are like me and find Carter an absolute necessity in life, this will appeal greatly. If you don't know Carter's music, this recording has the advantage of being very short, so that you can listen quite a few times and get closer to the music without spending weeks doing it.

It is a Carter work that has the complexity built-in so that it is ever unfolding to you each time you re-hear it. Alexa Still gives us a marvelous reading and the CMS under Weiss is spot-on.