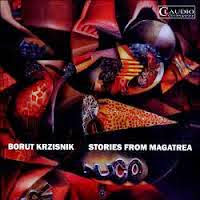 Slovenian composer Borut Krzisnik (b 1961) has a kind of aggressive, almost brutal sound to his music, as judged from his album Stories from Magatrea (Claudio Contemporary 6009-2). A series of six interrelated movements/compositions flow together to create a highly dramatic soundscape that is alternatingly infernal and bleak, menacing and hyper-wrought.

He achieves a large, expansive sound by means of four string players (violin, viola and two cellos), clarinet, and a virtual orchestra created by means of keyboard-MINI driven samples. The combination works well to give a large orchestral sound that through its partly virtual nature sounds all the more nightmarish at times.

His is a highly kinetic, energized, expanded tonality, a very personally distinctive kind of high modernism that sounds nothing like Stravinsky's "The Rites of Spring" yet shares with that work a highly sophisticated, rhythmically charged "savagery".

Krzisnik's music has such power that after a while you accept the sampling presence and appreciate it all as electro-acoustic music of a very original stamp. Nevertheless I would love to hear some of this played by a full orchestra.

Either way this establishes Krzisnik in my mind as a composer of great imagination and daring. There are apparently a number of other releases out. If they are of the same high caliber then I suspect we will be hearing a great deal more from this man!

Hear this and be transfixed.