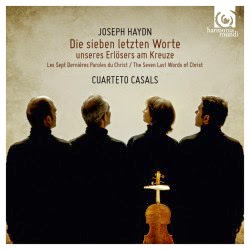 Joseph Haydn's The Seven Last Words of Christ is one of the most unusual and expressive works of his era. He conceived of it (1786-7) in the first place for string orchestra, for a Good Friday commemoration in Cadiz. He later made a transcription for string quartet. It is this latter version we hear on the Cuarteto Casal's recording (Harmonia Mundi 902162).

The nature of the subject matter both demanded and enabled Haydn to disregard the movement expectations of the time. As a sort of instrumental cantata with seven movements, each slow and in a minor key, the "Seven Last Words" breaks ranks with ordinary classical form in this way to come to terms with the meaning and mystery of those last words.

Of course the Passion of Christ is central to the Christian year and so on Good Friday it is recounted. It is the darkest of all moments in the religion, followed of course by the jubilation of Easter Sunday. But faith or no, who isn't horrified when in desperation Jesus cries "My God, my God, why hast thou forsaken me?" It is this darkness that Haydn set about representing in musical terms.

The classical era was one where there were musical limits set to the expression of the more extreme feelings. Late romanticism or even high modernism (listen to Penderecki's "The Entombment of Christ") was allowed a much wider swath of expression to deal with such themes. That Haydn both worked within and stretched the boundaries of what was allowed him and created in the process an unforgettable work is a testament to his brilliance and in many ways at the edge of what you might say was the "avant garde" of his time.

The string orchestra setting is less intimate; the string quartet setting has perhaps a bit less power and dynamics. Both settings are beautiful and ideally you should have both. The Cuarteto Casals gives us as sternly direct and no-nonsense a reading as you'll hear on the quartet end. It expresses the angst and the mystery of the music as well or even better than others I've heard.

Such a haunting work needs a certain amount of expressive power at times and a mournful reserve as well, a glimmer of hope and regretful contemplation. The Casals Quartet provides the proper balance that the music demands.