Eduardo Raon, On the Drive for Impulsive Actions 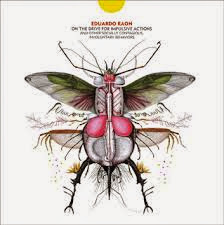 There seem to be an increasing number of artists out there today whose music is located somewhere in the interstices between freely improvised music and new music classical. The vocabulary of the sounds and tones are somewhere in between. There is a sequential structure that often enough is more than freely creative, yet within that envelope is music that sometimes sounds composed, sometimes free improv.

I have covered such music on this site from time-to-time. Here is another.

Eduardo Raon creates a twelve-part sound poem he calls On the Drive for Impulsive Actions (ShhPuma CleanFeed 007). The music is created on harp for the most part, played conventionally and unconventionally. At times it sounds like it is also multi-tracked, and it is at times subject to electronic manipulation. There is also something he calls the Daxophone, percussion, the occasional sound of voices in laughter--children and adults--and the appearance of the whir of Screaming Cicadas.

All is sequenced in a way that gives it structure. Some sounds seem randomly or freely generated, others sound a bit more worked out. But the impressions overall are of a spontaneous, creative generation that has been sound-sculpted by Raon.

The sound of the harp predominates as a rule, yet all sounds flow smoothly together to create a work of art that is much more than a collection of disparate sounds.

It is fascinating to hear. It has an aural attractiveness which the harp does much to create. And Raon has an inventive knack on the instrument.