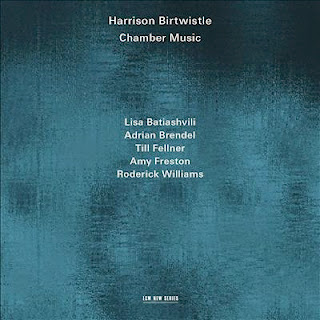 Composer Harrison Birtwhistle (b. 1934) has been creating high modernist music for many decades, yet for some reason I have not paid him sufficient attention. He writes a music that refuses to show a smooth patina, but has a rough-hewn wildness about it. In the composers' words, "Highly polished surfaces are dangerous. You can only see your own reflection in them." And so he proceeds freely and personally to put a scuff on his musical phrases. The intuitive freedom built-in to his works makes them difficult to perform but ultimately highly enigmatic in a way most engaging to the careful listener.

All this can be heard in the new release of some of his Chamber Music (ECM New Series B0020436-02), just out yesterday here in the States. There are four substantial works represented that show him most certainly a leader in the generation of British artists to come after Britten.

Each work has its own inner life. Two are song cycles, one combines song with extensive instrumental commentary, and there is the Trio for violin, cello and piano. The latter has great depth as well as a horizontal trajectory. Each phrase and its seeming concomitant response from the three instruments have a framed feeling to them, deeply set in their places, the dialog by no means random sounding but unexpected somehow though there is logic to the sequence once you hear it several times. It unfolds like phrases in an unfamiliar language where meaning and sound reveal themselves only gradually.

The song cycles are equally intriguing. The "Three Settings from Lorine Niedecker" for soprano and cello and the "Nine Settings from Lorine Niedecker" for the same configuration act as end pieces at the beginning and ending of the program. They are plaintive and haunting, stark and matter-of-fact in a terse Webernian sense, helped along greatly by the artistry of soprano Amy Freston and cellist Adrian Brendel. "Bogenstrich--Meditations on a Poem of Rilke" is more dramatic and expansive, and sometimes more lively with baritone Roderick Williams playing off of pianist Till Fellner and cellist Brendel in sometimes more extroverted, dramatic ways. There is more in the way of density at times in contrast to the other vocal works, yet too at times a contemplative, mysterious quality in common with them. The baritone has its say and the instrumentalists then comment upon the proceedings at some length. Williams returns in the final movement and the cycle comes full circle without repetition as much as reiteration and recursion.

We haven't mentioned violinist Lisa Batiashvili, but kudos to her for her role in the Trio. In fact all give precise, energized interpretations of these works. It is a superlative program and the performers give life to the music with sympathy, understanding and tempered feeling.

I have gained much from this program. Birtwhistle becomes less enigmatic and more familiar to me thanks to this music. That he is neither here nor there is the point, for that is what Birtwhistle strives for--to disappear from your perceptions in favor of the tones themselves. That is what makes him special, it seems to me. He is more an embodiment of musical being and less of musical personality than perhaps anyone in his generation. Bravo for that!