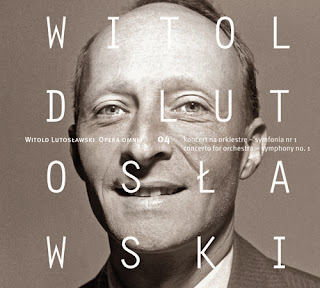 As we pass the 100th anniversary of the birth of Polish composer Witold Lutowslawski (1913-1994), we are happily seeing a good deal of his music available to us. One especially notable and ambitious undertaking is the Opera Omnia (instytut muzyki i tanca), which I presume when finished will comprise his entire orchestral output. Up today is Volume 4, which includes his "Concerto for Orchestra" (1950-54) and his "Symphony No. 1" (1941-47). Stanislaw Skrowaczewski conducts the NFM Warsaw Philharmonic Orchestra.

These are two works of great interest that we might not otherwise get the chance to hear. The performances are good.

Both works are in an earlier, yet invigorating style. They do not sound quite as abstract or "modern' as his later works. They are harmonically advanced with melodic contours more linear and unfolding, a bit more similar to Bartok's later works without suggesting that they are in any way derivative.

No, Lutoslawski has come into his own by the time he wrote these. They are highly attractive, very well-wrought works of their time. They fully deserve our attention.

And they flesh out the early-mid period of his music in excellent ways. Highly recommended.