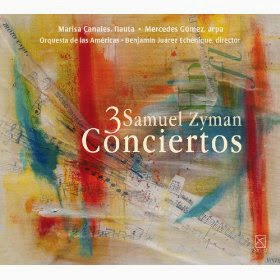 For these works there is a pronounced Latin American feel in the music's minor mode flourish, plus perhaps a shade of Zyman's Jewish heritage. The music is thematically rich, well structured and rhythmically vibrant. Ms. Canales brings an articulately exuberant lyricism with some bite to the flute parts; Ms. Gomez plays quite beautifully with a hint of the staccato feel that comes out of traditional south-of-the-border harp music in the folk vernacular.

The music has a modern touch yet brings the thematic memorability of earlier times into play. It's almost neo-classical in its elegance of form and content, not really Stravinskian but with an appeal not unlike Igor's music in his middle phase.

It is delightful in every way. Score! Definitely recommended.