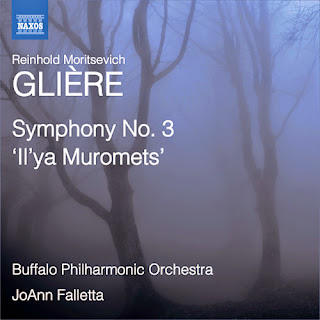 Reinhold Moritsevich Glière (1875-1956) may not be at the tip of your tongue when it comes to naming Russian composers of the 20th century. In his day in his home country he was a celebrated figure. You may know his ballet, The Red Poppy. You may not know much else. Yet his Symphony No. 3 in B minor "Il’ya Muromets", Op. 42 (Naxos 8.573161) is a towering work for large orchestra, a late romantic blockbuster that rivals Bruckner and Mahler for scope if not actual content, yet throughout has a thoroughly Russian caste to it.

For whatever reason it has not been available all that frequently on disk here in the States. Hermann Scherchen and the Vienna State Opera Orchestra did a version in 1952 I believe, which was complete on two LPs; there was a Russian version that came out on Columbia in the later '50s but if I am not mistaken it was edited to fit onto one LP. Part of the difficulty back then was that it was too long a work for one LP and not quite long enough for two. That doesn't seem like a good enough reason to ignore the work but things do happen, or rather don't happen out there for even lesser reasons.

I have both analog versions and have appreciated the symphony for a long while. If there were digital era recordings of the work I missed them. But now at last we have a complete performance of the third recently recorded in full fidelity by JoAnn Falletta and the Buffalo Philharmonic. It is out on Naxos--so the price is right.

There is more than price that makes this a worthy release, however. JoAnn Falletta is a first-rank conductor for romantic and late-romantic fare and she has been doing some wonderful things up in Buffalo, many on Naxos. We've covered more than a few on these pages.

And surely she captures the epic breadth and spirit of Glière's symphonic masterpiece. Sprawling a work it is, but filled with passion and excitement. And originality. There may be times where you might hear the influences of Scriabin, Rimsky-Korsakov and the late romantics that came before. The perception quickly disperses, though, in the next contrasting section, so by and large we have a tabula rasa Russian work of excellence.

Glière finished the work by 1911. That makes sense, stylistically. It is a work not of the avant garde so much as within the advanced mainstream, though undoubtedly not everybody took it in during the first performances in those days.

Suffice to say that Ms. Falletta does indeed triumph here. The performance is nothing short of marvelous. Grab this one.