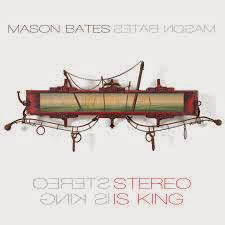 Stereo is King (Innova 882). That is the title of Mason Bates' CD release of various interrelated compositions. It at once suggests a retro stance, harking back to the late '50s when stereo was a huge big deal. Yet the image on the cover shows an odd assemblage that looks both retro and futuristic. The work depicted there is called Chained to the Future, a sculpted/constructed object by Jason Brammer. The image and title suggest how back then the future was seen as almost inevitable. Yet that future as it comes to us now is perhaps anything but what we expected. And we don't look to the coming years in quite the google-eyed way some did in earlier times.

And so maybe the music of Mason Bates has the "not what we expected" futurism built-in? Surely the music is of our day, and it may not be what we thought it would be in 1958.

And surely modernism is not the monolithic minimal super-clean squeaky world we may have collectively envisioned. It is many things, but not one-dimensional. Mason Bates' music is like that, or a part of that.

He encompasses a post-minimalism, working within a tonal vein that suggests the contrapuntal thrust of minimalism at its best, but not much of the repetition beyond some ostinato figures. There are implications of rock-funk sometimes without anything more than a suggestion of the obvious drums and bass (except as electronically created on "Terrycloth Troposphere") and instead an involved give-and-take counterpoint among the instruments. There are other works that linger awhile with a more lyrical unfolding. Mason makes a music of our time that has his particular original voice stamped onto it.

The music forces summoned from work-to-work fluctuate somewhat. Generally it is mid-sized chamber ensembles comprised of Bates' own electronica assemblages, the vocal group Chanticleer, members of the Chicago Symphony Orchestra, the Claremont Trio and Tania Stavreva on piano.

Unlike some of the "radical tonality" folks we have been talking about here, this music has more motility, less soundscaping and more what one could almost call a "neo-baroque" stance.

It comes our way and, like anything else, it is gone, unless we choose to play it again immediately afterwards. But what is between "start" and "finish" is some well put-together, thoughtful and vibrant music that creates a syntax that flows in "variations-on-variation" ways. It is no mere hearkening back. It has more of a modernist pan-thematic unfolding stance than the old through-composed melodic and harmonic periodicity of the pre-modern of 100 years ago.

Mason Bates has a fertile musical mind that comes through here in ways that reward the listener with something complex enough, substantial enough to keep interest level high and yet quite accessible even for those who may eschew a brasher modernism. Well done! Bravo!