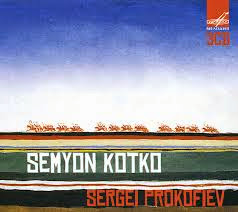 Prokofiev's opera Semyon Kotko (Melodiya CD 10 02120 3-CD) is the least known of all he wrote. Part of that has to do with the politics of the Stalin era, the other part has probably to do with the plot. Prokofiev settled back in his home country at the height of an iron-fisted censorship imposed on composers in line with the "social realism" demands of the Soviet apparatchik. Doing his best to satisfy their demands he chose a libretto that centered around a peasant village in the Ukraine during WWI and the opposing relations the peasants had with German and Soviet troops.

The libretto included a number of Ukrainian folk-song lyrics but Prokofiev insisted (rightly) on writing his own melodies for them. Prokofiev tried to produce a "popular" work but the apparatchiks panned it and it was not performed again for many years after its initial run back in 1940.

It wasn't until 1960 that the present, first complete recording of the full opera was made and the work became acceptable and, eventually, a regular part of the repertoire there in the USSR. In Europe and the US the libretto seemingly had less appeal and I never saw any versions of it around in stores from my early listening/collecting days on.

In any event the music shows Prokofiev in good form. There were his modernist elements, some of that rare melodic gift he had, things which went to make him the musical personality he was, and though that was not acceptable at the time it sounds right today.

The music has definite appeal. If this Melodiya recording doesn't have a libretto in Russian and translation it matters not all that much because it is the music that triumphs above all.

It's a full-length opera filling three disks and I find it a fascinating listen. It may not be the best of all of Prokofiev--the Flaming Angel opera-wise has the leg up on that to me, but it gives the Prokofiev lover a treasure that adds considerably to what we have from that middle period. The performances are excellent.

I am glad to have it. The politics of the region make it topical, but that is neither in its favor nor to its disadvantage, because it was a story set in different times and has little or nothing to do with events today to my mind. Prokofiev lovers rejoice!