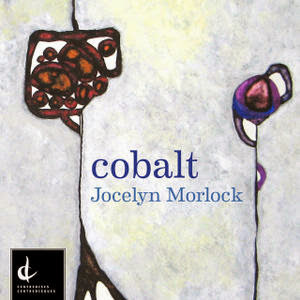 One cannot afford to ignore Canada's music scene. It continues to be vital. One of the bright lights up there is young composer Jocelyn Morlock, as can be heard in her new program of compositions Cobalt (Centrediscs 20014). On it we get a judicious sampling of two of her chamber works and five orchestral outings. We have come across her music before: a work performed by the Vancouver chamber group Couloir in a review posted last February 7th.

Ms. Morlock works in a modern tonal vein, with strongly key-centered works that tend often not to modulate but then do not feature a great deal of repetition either. Nor is the music in exactly a radical tonality vein. The music is sometimes elaborately ornate in its central melodic parts. On occasion there is a noticeable affinity with Arvo Part. Sometimes there is almost a drone-like harmonic rootedness that reminds slightly of Indo-Pak classical, other times it's more neo-classical in a post-modern way. All of it is engaging.

There are some programmatic elements to the works that will surely help Ms. Morlock capture a wider audience. "Music from the Romantic Era" features quotations and supportive passagework that suggest a playful approach to re-presenting the era. The music goes backwards in a way, starting with cadences and working to themes.

"Cobalt" epitomizes the color in nature and the toxic substance that has been used to produce the color in pigmentation.

"Asylum" deals with the troubled life of Robert Schumann. The piece begins with the first four piano notes of "Mondnacht" played as if in slow motion. "Oiseaux bleus et sauvages" is about summer and birdsong.

And so on. The works are played by a number of orchestras and some fine chamber players and come off well in the hands of all. I most certainly found the music lively, beautiful at times and always engaging.

Jocelyn Morlock is one to watch! This CD shows her very much in a budding and blooming mode.