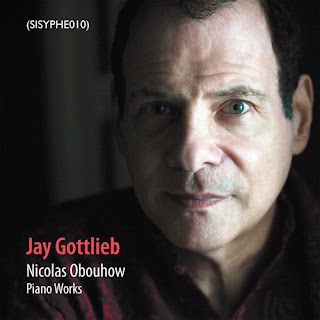 Nicolas Obouhow (aka Nicolai Obhukov) (1892-1954) is not well-known to us for various extra-musical reasons. He fled his native Russia after the revolution and settled in Paris. He studied with Tcherepnin at the St. Petersburg Conservatory, later with Ravel in Paris. He was initially influenced by Scriabin, then to my ears Messiaen.

A confirmed modernist, Obouhow wrote many works for piano (as well as larger forces). It is in the former category that we hear some selected gems performed by Jay Gottlieb on the album Piano Works (Sisyphe 010).

For this particular release I only have the front cover to go on. My player indicates 45 short cuts. I do not know if any are separate movements to a larger work or when the pieces were written.

But there is a distinct Scriabin influence taken further into harmonically advanced territory. At other times there is a modular series of short phrase events that suggest the influence of Messiaen. In either case there is something much more than influence at work. Obouhow has a daring personal way with his music.

In any case this is some startlingly fresh, ultramodern music from a nearly forgotten figure whose originality is in inverse proportion to the neglect he has suffered since his death.

Pianist Jay Gottlieb does the composer great service with some highly expressive and cognisant interpretations of some at times very difficult music on a technical level.

Obouhow (Obhukov) deserves our attention. This is a great place to start. I am certainly looking forward to his works in the orchestral realm!