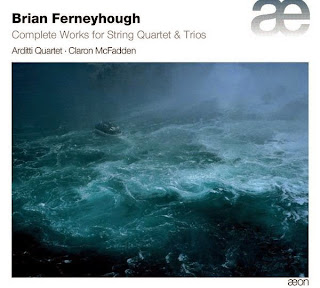 What is it that makes us respond to abstract high modernist music? Part of the answer is that some of us are attracted to the very new by disposition. Prior to last century there was no music that made full use of all the notes available in ways removed (mostly) from a key center, that simultaneously gave us rhythmic and timbral structures only found perhaps in nature previously, at least in such concentric ways. High modernism confuses the novice because its emotive content is not literal for the most part, though horror movies have sometimes made use of the sounds to project a feeling of high anxiety. The novice has not learned the musical language and so sees it as something meant to disturb, which isn't the case most all of the time.

Those who bask in the rarified sounds have learned the language. Like with a Jackson Pollock painting, there is rarely a literal subject matter, a concrete "meaning". The practiced avant listener lets the sounds take him/her into a different realm; she/he experiences it as a form of structured aural sensation in the same way as one takes in the pattern of dripped pigment in a Jackson Pollock.

These are thoughts that occur to me as I listen once again to Brain Ferneyhough's Complete Works for String Quartet & Trio (Aeon 3-CD Set 1335) as performed by the Arditti Quartet.

Ferneyhough (b. 1943) is one of the later generation of abstractionists, compared with Boulez or Elliott Carter. Other than a student work not included in the set, he began his output for quartet and trio in 1967 while still a resident of his native England, before he spent significant time teaching composition at Freiburg in 1973-1986. He then made the move to the US, where he has resided since.

That first work was his "Sonatas for String Quartet" which fittingly opens the program and begins our journey through the complete works. I've noted before how the string quartet as practiced by later Beethoven, Bartok and Carter is the medium where an ambitious composer might express his most profound and/or esoteric musical thoughts. Ferneyhough's works here have a terseness and absorption in the abstract. The focused intent most definitely puts the music in that transcendent realm of pure essence, rivalling some of the best the quartet medium has to offer us.

The Arditti Quartet give us extraordinarily expressive yet attentively precise readings of the works, 11 in all. A highlight is most certainly Ferneyhough's "String Quartet No. 4" (1989-90), which follows the example of Schoenberg in including a vocal part, sung very well here by soprano Claron McFadden. The three volumes take us from the initial 1967 opus all the way up to his "String Quartet No. 6" from 2010, quite a journey.

You can hear development within those 43 years, perhaps most strikingly in a refinement, a gradually more unrelenting sense of concentration. The String Trios, one long and one very short, certainly sound like they belong in the set, both stylistically and sonically.

The Arditti Quartet give us breakthrough performances of music that is as much or more difficult to play well as it is to listen to meaningfully. This is no light fare. It is difficult music on many levels. It compromises not at all. That is all the more reason to tackle the set. It is landmark music of our time in definitive readings. And it gives back as much as you the listener put into hearing it.