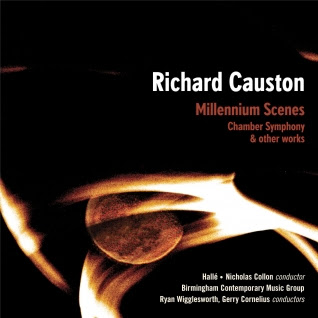 As the Millennium approached I fully expected a revival of modernism to suit the occasion, with a bevy of futuristic works. That didn't quite happen the way I expected. The horror of 9-11 had some bearing on that but then we had adjusted our vision of a limitless future in the years before. And so the world had less of a vision of earthly paradise and the new music to go with it than one might have supposed a half-a-century ago.

Nonetheless the modern world and the music to go with it did continue to be a factor. One of the composers doing a great deal to uphold his end of the future is Richard Causton. His Millennial Scenes (NMC D192) is every bit the sort of futuristic work that satisfies my forward-looking expectations. In fact the CD contains the title work "Millenium Scenes: Music for Large Orchestra in Two Parts" plus four other works written between 1995 and 2010. They bring us the future-now music at its best. He's a rather young fellow with an ambitious style of writing and the dash to pull it off.

"Millennium Scenes" pits string, brass, wind and percussion sections against each other in a very vibrant and dynamic four-way interaction. The other works--"Nocturne" for ensemble, "As Kingfishers Catch Fire" for flute, clarinet harp, and string quartet, "the Persistence of Memory" for ensemble, and "Chamber Symphony" all have their considerable say thanks to the Halle Orchestra under Nicholas Collon, and the Birmingham Contemporary Music Group under Gerry Cornelius or Ryan Wigglesworth.

Each work is a kind of waystation of a particular originality and in the end you are left with a feeling of talent well-realized. Causton has a sense of form and line that is conversational at the highest levels, with every part contributing to the totality of musical utterance in cohesive ways.

Richard Causton creates music out of "the modernist tradition of the future" and goes along his considerably original personal path to get there.

It's one of those indispensably new offerings no one who revels in our present-day, very musical times can afford to miss.