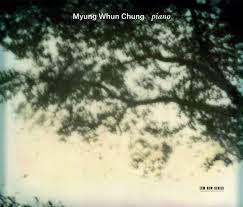 When I was a kid supermarkets would sometimes offer the shopper an anthology of the greatest classical (orchestral) music in installments every week or month, each volume with some blockbuster from the standard repertoire in bargain-basement renditions, some that weren't so great, others surprisingly good, but either way the price was usually right. People like Readers Digest did the same but sold them as one set. The idea was that the family could be exposed to great "culture" pre-selected by experts. All they had to do was buy and listen. Then the idea was reduced to snippets, 100 of the world's most beloved classical melodies, for example. For the most part chamber music was left out of these offerings.

The modern would-be music lover has less of such things offered to her/him. Yet there still is a real need for something introductory for the novice to enjoy and perhaps by which to grow into a full-blown enthusiast.

Today's recital by Korean pianist Myung Whun Chung, primarily known as a conductor, does well for piano what those supermarket anthologies did less well for orchestral. He selects some very famous, melodically unforgettable, short piano works and plays them with a real poeticism born of talent and inspiration. The album is called simply Piano (ECM New Series B0020541-02).

This is meant for the younger listener and the novice, but the quality of the performances means that they form an enjoyable experience for the more cognisant listener as well.

What's on the program is very well-chosen. There's Beethoven's "Fur Elise", Debussy's "Claire de Lune", Chopin's "Nocturne in D-flat Major"and even Mozart's "12 Variations on 'Ah! vous dirai-je, Maman'" which (I hope) everybody will recognize these days as "Twinkle, Twinkle, Little Star". There are other works too, all appropriate and well-played. As always the ECM audio is impeccable.

For the budding ears of the young and the older alike we have in this a near-ideal introduction to the classical piano, as it were. This one makes a great gift but also something to play around the house for the kids, or grandpa, or yourself. Stockhausen Klavierstuckes? No. That would have to come later...