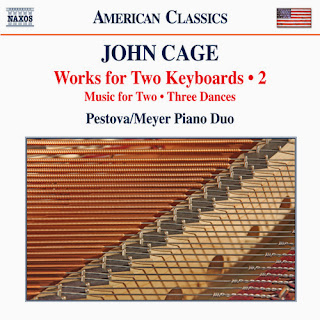 John Cage (1912-1992) wrote music for piano that changed the face of the modern scene. There are so many landmark works in this realm that the mind boggles a little. Of course the Sonatas and Interludes for Prepared Piano (1946-48) were the breakthrough works that established him--and all that followed most certainly sustained his reputation as one of the most remarkable composers for that instrument in the last century.

There is an embarrassment of riches, a wealth of works to explore if you have the time and patience. It pays off. A great place to start is the recording just out and up today: the Pestova/Meyer Piano Duo play Works for Keyboard Volume 2 (Naxos 8.559727).

I missed Volume 1 but if it is anything like the current volume it is well worth your trouble. Xenia Pestova and Pascal Meyer gave us a stellar version of Stockhausen's Mantra a few years ago, which I covered in the Gapplegate Music Blog on October 25, 2010--see http://gapplegatemusicreview.blogspot.com/2010/10/stockhausens-mantra-in-pleasing-new.html. I have also had the pleasure of hearing and reviewing Xenia Pestova's Shadow Piano (see the March 24th, 2014 posting on this site). The two recordings led me to anticipate the duo's Cage and disappointed I am not!

The Volume 2 has a nice mix of early and later Cage. We are treated to versions of his "Music for Two" (1984/87) and "Three Dances" (1945), the latter for prepared pianos. The two works offer a contrast and a good encapsulated feel for Cage's transformations in sound and concept over time.

The prepared piano suite has the motor impulses of a percussion orchestra creating highly rhythmic music for dance. Comparisons have been made between this music (and those Cage works similar to it) and Balinese Gamelan, which is by no means a stretch. The Pestova/Meyer Duo wisely approach the suite as if it were music for percussion ensemble. There is no place for rubato or other extra-rhythmic expressive devices that come out of conventional pianism and they do not attempt to utilize any of it. They also tend to take their tempos a little slower than on some versions I have heard, to better interact and create a rhythmic leverage in keeping with the intentions of the composer. They do a great job. They make it all rock-steady, make it "swing" so to speak. I've heard others that have tended to rush and/or sometimes interfere with the all-critical pulsation, but not here.

Cage's "Music for Two" is a part of an ambitious series of compositions Cage never quite completed. He wanted to create a work that could be performed by any number of instruments, each with a part to add if they were participating. He started with a version for two pianos as heard here, then eventually parts for 15 other instruments.

The two-piano version is a study in contrasts. Bowing notes inside the piano, isolated notes, clusters of notes, legato, staccato, and spaces in between act as a kind of Zen rock garden meditation in sound. Pestova/Meyer do the music perfect justice, creating a magical aura that on repeated listens has a very evocative vibe about it.

These are some of the most inspired performances I've heard of Cage for piano. And I've listened intently to a lot of it. Pestova/Meyer triumph! Do not hesitate. If you don't know Cage well this is an ideal volume to begin explorations. If you are a confirmed Cage adept this is an affirmation. Spellbinding!