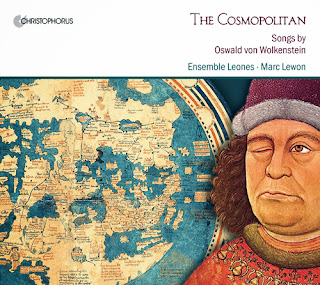 Oswald von Wolkenstein (1336?-1445), songster-composer, poet and diplomat, a member of the South Tyrolean nobility. . . . not a name on the tip of one's tongue unless you are a specialist in the late middle ages-early renaissance, but nonetheless a figure of stature.

Ensemble Leone, under the direction of Marc Lewon, give us a rather full look at the composer side of Wolkenstein with The Cosmopolitan (Christophorus). Ensemble Leone comprises six members, vocalists and multi-instrumentalists of a good assortment of period instruments.

Von Wolkenstein's songs are interspersed with instrumental pieces for dance or entertainment. As has been the case since the sixties of last century, the ensemble takes pains to bring out the unique timbres and almost "ethnic" flavor of the secular music then in style. Unlike music for the church there is some part singing but not as a main focus.

The songs form of course the body of the presentation. Ensemble Leone have fine vocalists who project the basically vibrato-less folk vocal qualities of the period. The songs are treated acapella or with small-to-larger-sized instrumental accompaniment. Instrumental selections vary quite nicely as well in terms of the instruments involved for any given number.

Anyone who wants to understand our current era probably should sample deeply the modern early music recordings that are now so plentiful. We are in an age that has "discovered" this music in a way similar to how the romantic era rediscovered Bach. Along with our heightened knowledge of world traditions there are universes of possibilities to discover.

Ensemble Leones' fine program of von Wolkenstein's music is a great pleasure to hear, an indispensable addition to your early music collection. They give us excellent performances of music of depth and beauty.