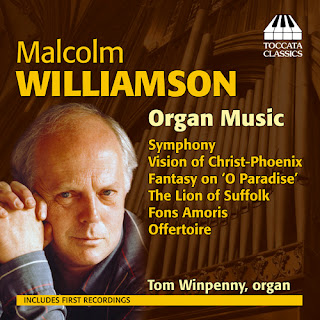 The organ continues to find adepts and composers for the very obvious reason that it still plays a central role in liturgical services of the cathedrals of importance in the world. Malcolm Williamson (1931-2003) was both an adept and a composer of note. Raised in Australia he came to England in 1953 and made something of a name for himself as a composer there, enjoying the tutelage of Eugene Goossens and the approval of Benjamin Britten.

He became Master of the Queen's Music in 1975 and retained that position until his death. His organ music shows a bold modernism that in part comes out of Messiaen's influence but then strikes out on its own path. A volume devoted to his organ music is just out, played with panache by Tim Winpenny on the aurally spectacular organ of St. Mary Redcliffe, Bristol (Toccata 0246).

The "Symphony for Organ" (1960) is the centerpiece of the recital. Surrounding works, some enjoying their first recording, date from 1955-6 ("Fons Amoris") up through 1980-1, with the Offertoire from the "Mass of the People of God".

Throughout the sound is brilliant, the performances strong and dynamic, and the music alternatingly mystical and triumphant. It shows us that Williamson was a major figure in modern organ music. Both organ aficionados and those who appreciate the harmonically enriched world of modernism will respond to this readily.

Perhaps it is one that's easy to overlook, but in its own way it is monumental!