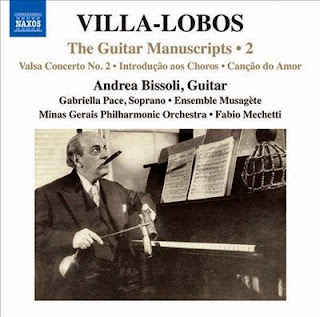 What Heitor Villa-Lobos (1887-1959) did was create a vibrant modern Brazilian classical music virtually single-handedly. There were others, surely, composing there in his lifetime but he was the first to leave us a body of work that epitomized what is possible and left an original stamp that was both wholly original and very Brazilian.

You can hear this on many recordings, today's being a very good one. The Guitar Manuscripts 2 (Naxos 8.573116) takes up where Volume 1 leaves off, with more obscurities and classics. Once again Andrea Bissoli, guitarist of communicative warmth, plays the role of principal soloist here.

We begin with Bissoli's guitar arrangement of Villa-Lobos first extant composition, "Dime perche" from 1901. You can hear the composer already moving forward. "Valsa Concerto No. 2" from 1904, was apparently inspired by an overheard remark Segovia made about the unidiomatic qualities of V-L's guitar compositions. It remained unfinished until Andrea Bissoli did the honors.

From there we have four works that reflect on Villa-Lobos's transformation of Brazilian street band music, the first, "Sexteto mistico" (1917), and then the later series of direct adaptations of the popular Choros style to the musical modern-classical personality of early Villa-Lobos: "Introducao aos Choros" (1929) and "Chorus No. 6" (1926) for symphony orchestra, and "Choros No. 1" (1920) for solo guitar.

Finally we have a lovely "Cancao do Amor" (1958) for soprano and orchestra, a movement from "Forest of the Amazon", which was used (in part) as the soundtrack for the film version of Green Mansions.

The music is generally enthralling, the performances very good to excellent. Bissoli, Ensemble Musagete, the Minas Gerais Philharmonic Orchestra under Fabio Mechetti and soprano Gabriella Pace offer up to us the music in all its idiomatic splendor and charm.

Some of this is indeed obscure; all of it is very worthwhile Villa-Lobos that no doubt will give you many hours of enjoyment whether you are a confirmed Villa-Lobos appreciator (such as I am) or new to him. Very much recommended!