Matthew Burtner, That Which is Bodiless is Reflected in Bodies 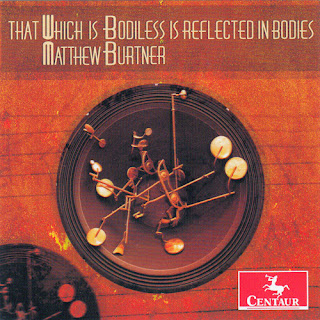 The natural tonal qualities of pitched and unpitched percussion have an affinity with electronic music. Back in the day (1972) the simple little studio that was a supplement to the huge RCA Synthesizer at the Columbia Princeton Electronic Music Center had little for sound generation except an oscillator, a Moog, an electric organ and a gong. The gong of course was rich in overtones and so had a complex timbral quality that made it a great addition. Some of us remember live and electro-acoustic works Stockhausen made centered around a gong. Of course percussionists had their renaissance as an important component of high modernism in general beginning especially with Varese and his all-percussion "Ionisation" and going from there. The last 100 years have seen the transformation completed. Looking back, it is rather one of the more amazing developments in "Western" music in our time.

With all that as a backdrop I introduce to you Matthew Burtner and his electro-acoustic album That Which is Bodiless is Reflected in Bodies (Centaur). I have the sounds and the cover and not a lot else to go with as far as information. But what I find on Burtner's website and what I hear gives me plenty to talk about.

There are nine parts to the work as a whole. They vary greatly from the sonically sustained soundscape to the pulsating electro-acoustic noise-pitch poem. The prototype version was written in 2004, created for playback in the rotunda dome of Thomas Jefferson's Monticello. That original version was for Tibetan singing bowl and electronics. The version we hear on the album adds a more extensive live percussion set up.

In the composer's words the work is meant to explore "notions of disembodiment through the combination of physical and virtual objects and environments".

The experience of this work is that of a cosmic sound-world, a shifting kaleidoscope of timbral presence that has a particular individual quality for each movement.

It has the ambiance of place and time. There is an engaging interaction of complex timbres, both pitched and unpitched, working together in nearly orchestral ways. If this be music (and of course it is), play on.

The adventurous electro-acoustic explorers out there should eat this one up. Nothing I've heard sounds quite like it. The singularity that is Matthew Burtner deserves your attention. Recommended!

Email ThisBlogThis!Share to TwitterShare to FacebookShare to Pinterest
Labels: matthew burtner that which is bodiless is reflected in bodies gapplegate classical-modern review, modern electro-acoustic music from the usa, percussion and electro-acoustics