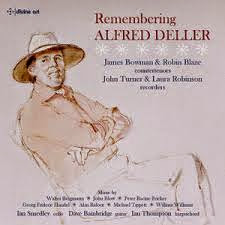 The early music revival that began to burgeon last century changed what was ultimately part of the overall repertoire and how it was to be played. Works long dormant came to our ears again after centuries of neglect. The idea of instrumental and vocal authenticity in performance practice underwent a revolution, as did the number of artist and ensembles devoted to the music.

Certainly the rise of countertenor Alfred Deller had a great impact on all this. At the same time contemporary composers began increasingly to turn to instrumental and vocal aspects of early music as inspiration to their works. Composers Michael Tippett and Walter Bergmann were important figures in general and for Alfred Deller in particular. Tippett encouraged Deller, introduced him to the concert world and wrote importance music for him; Bergmann was a key musician (harpsichord and recorder) in the heady first years of the revival in England, and a composer of talent who showed the influence of early music. Both had influence on editions of Henry Purcell's music that came out then, which had vast ramifications for the movement.

All this is celebrated and commemorated in the new album Remembering Alfred Deller (Divine Art 25114), a well conceived album of early and contemporary music performed by countertenors James Bowman and Robin Blaze and recorder artists John Turner and Laura Robinson. They are joined as needed by a continuo of harpsichord and cello, and solo guitar.

Everyone sounds quite good in the performances here. The program ranges widely: 20th century works by Bergmann and Tippett as well as Peter Racine Fricker and Alan Ridout, early music works by Handel and William Williams, and the extraordinary John Blow (1649-1708) work "Ode on the Death of Mr. Henry Purcell" a beautiful piece that Alfred Deller gained renown from in performance. (His version happened to be on the first early music LP I was exposed to when young).

The album by showing both the modern look-back of contemporary composers and some of the revived works gives you a feel for the impact the rise of Deller and the early music movement had last century. It is an absorbing listen, a nicely performed, even surprising program of affinities and influence.

Well-worth hearing and studying in depth!