Aeonia, At the Door to Eternity, Music of Donald Skirvin and Eric Banks, the Esoterics 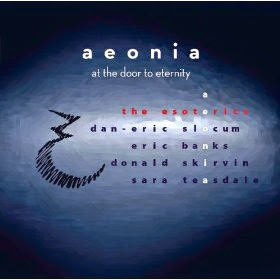 The voice was probably the first instrument. 19th century armchair speculation about the origins of everything usually asserted it. There's no reason to believe it isn't true. We may have gotten the idea from listening to the birds on a fine spring morning. No doubt it happened spontaneously among many separate groups scattered across the world. Who can say?

Whatever happened then, it is true today that we respond naturally to vocal music. A good chance to do that is provided by the a cappella Seattle choral group the Esoterics, now in their 20th year. They have a bias toward the performance of modern works, and that is much needed. They are excellent.

On their new disk Aeonia: At the Door to Eternity (Terpsichore 1513), they feature two modern symphonic suites for unaccompanied chorus. "Stars Forever While We Sleep" by Donald Skirvin (b. 1946) and "I am Among Them" by Eric Banks (b. 1969). Both works are thoroughly evocative, tonal contemporary offerings beautifully rendered by the choral ensemble.

Skirvin has been Composer in Residence for the Esoterics ever since 1998. Understandably he has composed a good number of works for chorus. The present one at hand was composed in 2009 and uses the poetry of Sara Teasdale as texts. Eric Banks is the Musical Director of the Esoterics and he too is a composer of multiple choral works. The present composition heard here was composed in 2013 and is based on poetic texts by Dan-Eric Slocum.

Each work has warmth, beauty and a sort of searchingly poetic quality handled beautifully by the 36-voice ensemble. Choral works of this sort when well sung are nearly irresistible to my ears. Certainly the Esoterics are among the foremost of such ensembles today. They give us much to appreciate on Aeonia.