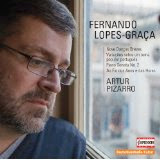 Fernando Lopes-Graça (1906-1994) was one of Portugal's foremost exponents of modernism. I am the lesser for not having heard his music much previously. Happily I have a copy now of Artur Pizarro playing a goodly selection of his Piano Music (Capriccio 5196). If I say that his piano music has more in common with Stravinsky than Schoenberg or Boulez, that is not to say that he sounds like a Stravinsky imitation, far from it. It is only to say that there is a harmonic-melodic situational horizontality and rhythmic drive that puts the music closer to Stravinsky than Boulez. The liners say he is like Bartok for the incorporation of folk strains (here from Portugal) into the modernist approach. I do not find that a contradiction. I do hear that too so I add that to my description.

All these works show sparkle, zest and brilliance along with a genuine feel for the pianoforte. They are played well by Maestro Pizarro. There is perhaps a hair more abstraction in the later work but nonetheless a pleasing continuity of folk and modernism throughout. The sonata has a more formal structural bent, perhaps, than the others but in all of these it is clear that Fernando Lopes-Graça was both of his time and original.

There is much sheer pleasure to be gained from becoming familiar with this music and its fine performances. This is not the music of a backwater. It is fundamental, even foundational piano music of the last century. It is sure to please those who love the burgeoning of the new as of last century, lovers of piano music and explorers of our now rather gracefully aging musical modernist period.