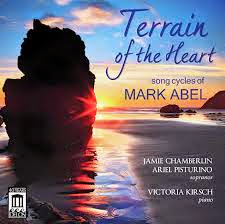 The art song cycle today? I don't hear all that much of it as composed in the present, which may just mean I am not getting exposed to it, or there isn't that much getting recorded and released. Either way West Coast American composer Mark Abel is an exponent who excels in the genre, judging from his song cycle recording Terrain of the Heart (Delos 3438). Two years ago I covered another of his for vocal and orchestra, The Dream Gallery, and I was captivated (see April 13, 2012). I must say he has done the same for me here.

He came to composing in the classical realm rather late, first having careers in rock and journalism. The three cycles on this disk indicates he has made the right move. These songs are about feelings, memories, relationships. It is music with a romantic bent, but not like Brahms or Tchaikovsky. There is a connection I feel when listening to the Samuel Barber of "Knoxville", in the sense that there is a tonality and expression that is not really European, and it is modern-tonal. It is tonal music of today without the long baggage train of tradition following behind.

"The Dark-Eyed Chameleon" and "Rainbow Songs" feature soprano Jamie Chamberlin; "Five Poems of Rainer Maria Rilke" finds soprano Ariel Pisturino as the vocalist. Ms. Chamberlin has a powerful operatic presence; Ms. Pisturino is slightly more intimate but powerful too. Victoria Kirsch plays the piano parts throughout. She has a fully realized poetic demeanor that does much to bring out Mark Abel's distinctive pianistic concept, both rhapsodic and contemporary.

This is declamatorially vibrant and moving music all around. The through-composed interaction of soprano and piano, of the music and the lyrics, works on all levels. This is art song at a high-water mark of invention. Now that may not mean that this music is for everybody. It is for anybody who appreciates song cycles; others unfamiliar may need to adjust to the medium. But of course that is true of classical as a whole. How many who love Beethoven symphonies also love Schubert's song cycles? Perhaps not as large a number as one would like.

Setting those things aside as "not my problem" at the moment, all I can say is that Mark Abel has created some very fine music here. It may not be on the edge of the future, it is not avant garde, but it probably could not be that and be as expressively effective as it is. Jamie Chamberlin and Ariel Pisturino each bring their beautiful vocal instruments to bear on these songs and make them their own. Different singers would give the music a different spin. Their dramatic lyric charge puts the music in a certain place that, after getting used to, seems right. Victoria Kirsch opens up the piano sound and does the modern yet very pianistically idiomatic parts full justice.

In the end I respond to this music strongly. Mark Abel has a vision and the artists do much to give it a full realization. Bravo!