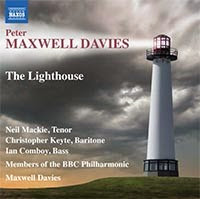 Naxos is doing a great service by issuing/reissuing much if not all of the music of Peter Maxwell Davies. We've been sampling some of it on these pages and it reveals a modern composer of great depth and stature.

Today we have his 1979 chamber opera The Lighthouse (Naxos 8.660354). It is a short one as operas go, complete on one disk as prologue and single act. The performance is a very good one, a reissue of Maxwell Davies conducting members of the BBC Philharmonic with Neil Mackie, Christopher Keyte and Ian Comboy in great form as the vocal protagonists.

The Lighthouse is based on a true story--of how a lighthouse supply ship made a routine call on the lighthouse on Flannan Isles in the Outer Hebrides in December, 1900. They found the lighthouse empty, yet all in order as if the three lighthouse keepers had abandoned their keep recently, in a hurry, vanished unaccounted for. None of them were ever found. Maxwell Davies takes these facts and builds a fantasia story about a threesome of keepers, one a fundamentalist, the other an agnostic and the third a mediator between the two. They argue, fog sets in, and they are besieged by ghosts from the past and the coming of a great light, the coming of "the beast".

It is a gripping story, the libretto written imaginatively by Maxwell Davies, with plenty of room for a macabre scenario that has music of great descriptive power.

The Naxos reissue does not have the libretto included, but for those who know English it poses no problem.

It is a gem of a work that unfolds more vividly with each hearing. And it gives you Maxwell Davies the modernist of dramatic tension. Every bar of music serves to illuminate the feeling of rusticity and supernatural doom inherent in the plot. He here nearly rivals Britten (not easy to do) in the brilliantly tight relationship of story to music.