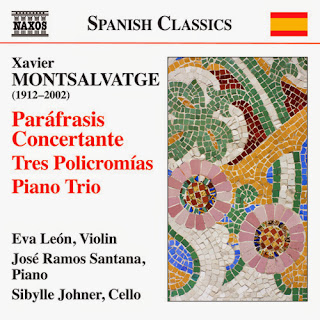 There is more than one Xavier Montsalvatge (1912-2002), the Spanish-Catalan composer. That is, over his career he worked in a number of overlapping styles. All that is clear when you listen to his Complete Works for Violin and Piano (Naxos 8.572621). There are works fully in the modernist zone, there are more neo-romantic, rhapsodic works, and there are works with a Spanish folk feeling that nevertheless maintain the Montsalvatge approach to it all. You can hear all of this in the album at hand, which covers the period 1943-1994.

Through it all there tends to be a melodic directness and a rhythmic vitality that is both Spanish in its way and 20th century as well, which perhaps accounts for in part the charm inherent in Montsalvatge's music. But it is the inventive qualities of his work here that takes the music further, that gives the music a certain brilliance.

The album today contains all the works for violin and piano plus the "Piano Trio" (1986-88). All of these works tend to feature an especially expressive violin part with the piano blocking out rhythmic-harmonic territory that is equally important to the sound and feel of the work but closer to what the piano part might do in a lieder, in other words with the violinist tending to take the lead role. The same applies to the "Piano Trio", with the cello forming a kind of neo-romantic basso continuo with the piano.

The "Variaciones" combine neo-baroque with Spanish-romantic brio. The "Parafrasis" and "Policromias" are the more outwardly modern, and the "Piano Trio" has a more neo-romantic spin on it all. But with these works the individual stamp of Montsalvatge and the 20th century are inherently present throughout.

This is a fascinating look at Montsalvatge "unplugged" as it were, expressing musically his unique mind in intimate terms. It is music well-constructed and often quite compelling, with brilliance and boldness.