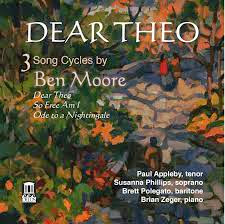 As said the other day, modern song cycles aren't exactly a lost art, but the number of new releases in the realm are somewhat less than those for the more consistent output of symphonic and chamber works. Nonetheless there is good music to be had in the song realm if one looks out for it.

Today, three cycles by Ben Moore, Dear Theo (Delos 3437). Moore (b. 1960) is an American composer of today who excels in the song form. The three cycles represented in this disk show his talent for dramatic musical settings of interesting texts. As the composer remarks in the liners, all three have as underlying theme the wish for freedom.

"Dear Theo" centers around Vincent Van Gogh's many letters to his brother Theo. For his most important creative periods, Theo was his benefactor and confidant, a sounding board in a world where Vincent was often in extraordinary isolation, his art being the sole purpose of his existence but he needing urgently someone to listen to his hopes, fears and ruminating on artistic visions. That was most often, in fact almost exclusively at times satisfied via his letters to Theo. "Dear Theo" crafts a moving cycle around excerpts from the letters.

"So Free Am I" has as its basis selected poetic texts widely separated by time, written by women and expressing their need for free self-expression.

"Ode To A Nightingale" is based on the poem by John Keats, each stanza essentially handled by a different song.

As a bonus we get Moore's setting of Yeats' "The Lake Isle of Innisfree".

From a musical standpoint the harmonic progressions of each song have great interest. They aren't typical, they work quite well as a constantly evolving through-composed movement against the expressive vocal parts, and they conjoin with text and vocal to create an expressive whole. It's a well-thought out tonality Ben Moore creates in these songs, neo-romantic in their own way, with an excellently integrated vocal and piano nexus, a sophisticated, ultra-musical approach that wears well over many listenings.

All the performers do well expressing Moore's intentions. Brian Zeger has a poetic touch and a flowing way with the piano parts. The vocalists approach the songs mostly in a very declamatory, operatic style--Paul Appleby as tenor for "Dear Theo", Susanna Phillips, the soprano featured on "So Free Am I", and Brett Polegato, whose baritone seems especially suited to "Ode to a Nightingale". All cover their parts well and allow the music to bloom forth for us to enjoy and enter into.

Moore has a true affinity with and talent for the song cycle. Anyone who appreciates the form and looks for something modern and contemporary-tonal will respond readily to these cycles. Moore and his music have conviction and a beautiful sense of line. Recommended.