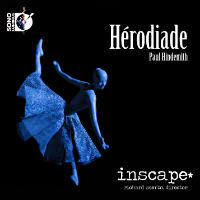 Paul Hindemith's ballet score Herodiade (1944) (Sono Luminus) is a highlight of his later career, though not often recorded. Written for Martha Graham and based on the dialog poem by Stephane Mallarme, it was completed in between semesters at Yale, where Hindemith had settled in after fleeing Europe and a German ban on his compositions.

The score runs some 20 minutes. The well-received ensemble Inscape* under Richard Scerbo gives us a lively yet precise reading of the work as a download-only album. It is music typical of Hindemith's mature period, scored idiomatically for chamber orchestra.

If you don't have this one, here is your chance. It is prototypically Hindemithian so a good choice for those who do not as yet have much by the composer. And it is hard to do better than this new Inscape* performance, so it is a welcome rendition for the confirmed Hindemith enthusiast, too.