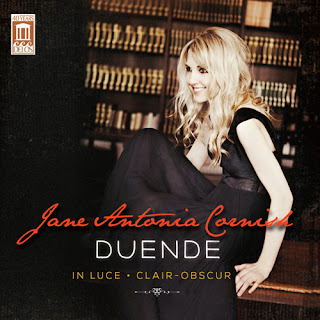 Not everything is written in stone, my old boss used to say. The world might behave day-to-day like it were, but then you compare one day with another and you see that there have been changes. It is as true of the music world as any other of our worlds.

When I grew up modernism was king. Many people didn't like or understand it out there but nonetheless it dominated the new music scene. As I got older minimilism challenged the dominance and now there is a post-style that goes beyond either but takes in some of what preceded. That doesn't mean that there once again is a dominant style. There are pluralities. I've said this before but it's worth reconsidering as we sample new composers, like the one up for discussion today, Jane Antonia Cornish.

She is English, still rather young judging from the photos. She gives us three of her chamber works on Duende (Delos).

The first, the title work "Duende", scored for piano trio, combines an archaic sounding chord progression that for various lengths of time repeats a la Arvo Part and features ornamentation and other melodic materials that overlay the progression sometimes in a way like the ancient "La Folia" variations by Couperin or others. But the passagework that sounds over the progression differs from a typical baroque and pre-baroque treatment by alternating between a concerted way (in the strings), a more whimsical way in the piano's role, where the embellishments are tonal and extra-tonal, and finally, a third way. This latter has the implication of the progression, an allusion to it without its actual presence except in residues, residuals.

It's a very captivating piece that bounces between progression, concerted passagework, and mysterium. The title refers to a Garcia-Lorca concept of duende "as a metaphor for the search of artistic essence through the trinity of the poet, muse and angel," as liner writer Brett Banducci puts it.

The string quartet "In Luce (Into the Light)" uses another progression and works the music around it in similar ways.

The duo for violin and piano "Clair-Obscur" centers around yet another progression integral to the unfolding of the work. The concerted-cadenza violin part works against the piano part in ways that perhaps at times are more directly contrastive to some of the preceding music in the work. But then paradoxically or eclectically there are passages where the relationship of violin to piano is virtuoso-against-chordal in ways somewhat more traditional.

It's music that remains exploratory while also sounding quite agreeable to those who want consonance to sound in their ears as much as possible.

In the end we have three works very well played by all concerned, that extend and make personal the Part archaic-in-modern ethos. It is a pleasure to hear Ms. Cornish's chamber music. The music provides delight. If you like Part this will certainly appeal.