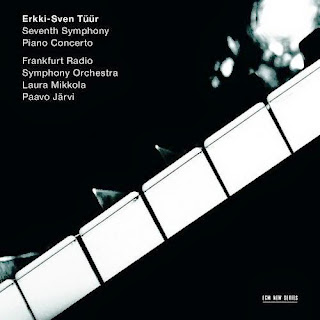 So many good composers out there today, so many new voices to hear! Today Erkki-Sven Tüür's Symphony No. 7 “Pietas”, Piano Concerto (ECM New Series) with Laura Mikkola as piano soloist, the Frankfurt Radio Symphony Orchestra and NDR Choir, all conducted by Paavo Järvi.

This is the sixth release by the Estonian composer for ECM New Series, so he is not precisely "new" in the unknown sense; nevertheless he is one of the voices of our time that needs to be heard.

Tüür was born in 1959, set about composing early on and received his first significant international recognition in the Finland of the later '80s. He has been going at it in the public eye ever since. I covered a disk that included a Tüür composition here on November 17, 2011. That was only a teaser because both works on the present release are lengthy and formidable.

Tüür avoids eclecticism and instead composes music in his own unified modernist way. The give and take of orchestra, piano and choir (the latter for the symphony) does not show traces of the pointillism of the Darmstadt School but moves along in blocks of sound that typify the section approach of late romantics and proto-modernists, though much more within a singular maelstrom of asymmetry at times and in varying combinations. The melodic-harmonic flair he so readily shows is both progressive in advanced modernist terms but also singularly his.

Both are movingly expressive, wonderfully orchestrated, brilliantly conceived works that give notice: Erkki-Sven Tüür has arrived. He is important to the "world new music" coming out today and we need to listen to him closely.

The performances are weighty and dynamic, beautifully wrought. The sound is glorious. Laura Mikkola plays a wonderfully catalytic role in the concerto. The accent is on new, because Tüür brings us that in a totally idiomatic way, as himself. Very recommended!