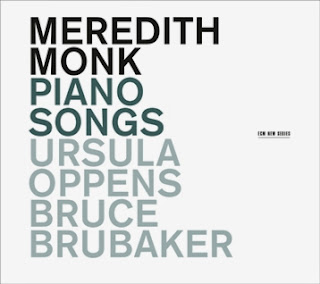 There is something "organic" about the music of Meredith Monk. I don't mean that she writes the musical equivalent of granola or that there is anything new age about it. The music seems to fall out of her imagination like a fully formed plant, so to speak.

We took a look yesterday at a fairly early work for vocal ensemble. Today a brand new recording, Piano Songs (ECM New Series B0020439-02) with Ursula Oppens and Bruce Brubaker giving us very idiomatic reads of her one and two-piano works. The pieces range from the early "Tower" (1971) to the fairly recent "totentanz" (2006).

Organic? Ms. Monk mentions in the liners the influences of Satie, Bartok and Mompou on her piano music, and that certainly can be heard. The folkish influence of Bartok and the diatonic lyrical melodicism of Satie especially come to mind as one listens. (Also for a moment or two early Stravinsky gets a bit of creative rechanneling.) This is a piano style that features extensive ostinato foundations and some very lyrical melody crafting. It all falls together expressively in a sort of way that hits me as "natural" (as opposed to "formal").

Her piano music is the opposite of formulaic. There is no overt stylistic structure-creation at work, but more a musical mind expressing what she hears at any given time. There is a disarming quality.

Oppens and Brubaker take to this music readily and sound just right. It is music that brings me great pleasure. And perfect for the budding memories of past and future. Excellent!