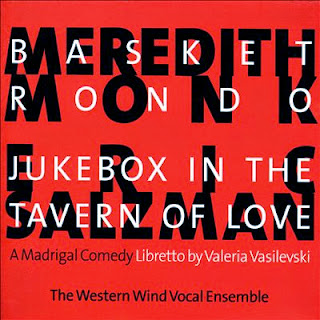 Labor records issues a recording of two vocal works sung by the Western Wind Vocal Ensemble. It is nice to have this music available. It gives us well-sung versions of Basket Rondo by Meredith Monk and Jukebox in the Tavern of Love by Eric Salzman (Labor 7094).

Meredith Monk established herself on the New York avant scene as a solo singer with several albums I believe that gained her an underground following. Her music was sung to syllables of her own making. There was repetition but the music had a feel more of an imaginary ethnic music of a ritualistic sort and performance art than minimalism as it was then enjoying its first run downtown.

"Basket Rondo", in eight parts, is something a bit further on from her solo vocal music. It combines the quasi-ethnic originality with repeating ostinatos, rondo-style counterpoint and variations on both.

It is performed beautifully here and forms an important part of Ms. Monk's vocal output on the avant underground scene.

Eric Salzman became especially well-known for his composition "The Nude Paper Sermon" which combined a sort of stream-of-consciousness narrative with electronics and vocal ensemble. It came out on Nonesuch and was recently reissued by Labor. "Jukebox in the Tavern of Love" is a short mini-opera that concentrates on the vocal writing.

It is the story of a local New York neighborhood bar during a storm and blackout. The bartender is about to close up when in walks a nun, a rabbi, a poet, a chorus-line dancer, and a utility worker. They while away the time waiting for the storm to clear by sharing each something poignant about their lives in a series of song-vignettes. It is music that combines early music, elements of Broadway musical and modern classical, with less of that latter than in the "Nude Paper Sermon" but there nonetheless.

It is a moving story and the music is fitting and original though a little less thoroughgoingly contemporary than some of his other compositions. The Monk work, on the other hand has a more modern and timeless quality.

The Western Wind Vocal Ensemble handles both very well. The Monk is in its way essential; the Salzman less so but nice to have.

Posted by Grego Applegate Edwards at 8:15 AM