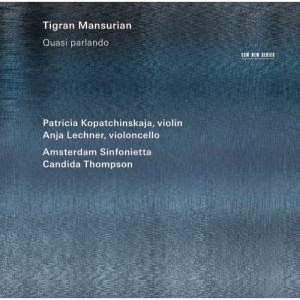 As Armenian composer Tigran Mansurian approaches his 75th birthday we are treated to a disk of mostly world premiere recorded performances of some beautiful works for string soloists and string orchestra, Quasi Parlando (ECM New Series B00220274-02).

It confirms the composer as an original, expressive post-romantic voice who shows his Armenian roots in subtle yet pervasive ways. Candida Thompson conducts the Amsterdam Sinfonietta with violin soloist Patricia Kopatchinskaja--and Anja Lechner joining in as cello soloist on the "Double Concerto" (1978), then taking the solo spot herself on "Quasi Parlando" (2012) . Two works featuring violin soloist and string orchestra continue the mood and sequence: "Romance" (2012) and "Concerto No. 2 'Four Serious Songs'" (2006).

Wolfgang Sandner in the liner notes talks about Mansurian's "aesthetics of reduction", the idea that the music expresses exactly what is needed for its purposes and nothing more. This is not a minimalism, however. It is rhapsodic expression that hangs onto the Armenian ethos while developing an advanced chromatic and often minor diatonic tonal palette that brings the music fully into our time.

Kopatchinskaja soars in the violin parts, as does Lechner for the cello. The string orchestra has presence and the audio is as ravishing as one might expect from the ECM New Series.

It takes a bit of time to sneak up on these works. They have sheer beauty but the structural continuity comes after a few hearings. These are works that move with grace but also great feeling, in a way the modern Armenian counterparts to a work like Berg's "Violin Concerto".

In reflection there can be solace. That occurs to me as I listen to these moving works. Strongly recommended.