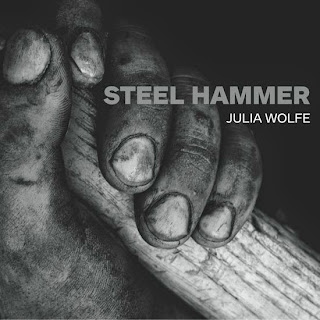 The US folk song "John Henry" captures something about industrial America in its formative stages. Everybody has heard it, I assume, at least once if not more often as they grew up. As a children's song it may not have as clear a message as it did for adults who first heard it long ago, particularly in the days when it was widely performed, when mechanization was replacing individual human labor. The heroic struggle between John Henry's superhuman steel-hammer driving versus the automated, mechanized steam version still has the power to move us. There is something universal in the story. And today computers perhaps have become what steam drills and mechanical hammers once were.

As with all folk songs transmitted orally there developed variants in the text. He is said in one version to be from Georgia, another Tennessee, he was short, he was tall, he was black, he was white, etc.

Bang On A Can composer Julia Wolfe has gathered the variants and written a piece around them for the vocal Trio Medieval and the Bang On A Can All Stars instrumental ensemble, a sextet of electric guitar, cello, clarinet, piano, bass and drums. The work, Steel Hammer (Cantaloupe 21099), is out on CD and I have been listening to it.

I have mixed reactions on this one. The singing of the variants can be long and drawn out minimalist style or can be rapidly executed in movements that have more density and speed. The variants, face it, aren't all that interesting as musical text. Does it matter if the hammer was nine pounds or twenty? And even if it does do we need a lengthy passage on the singing of it, the various weights?

The second issue I have is with the melodic motives. There are some intervals and harmonies that can be interesting when repeated and varied in certain ways, especially where rhythm is a factor. Others require a great deal of situational brilliance to transcend their ordinariness, particularly when there is little rhythmic movement. Wolfe's score contains some very interesting moments and others that are banal, perhaps deliberately, but not all that interesting (to me) nonetheless.

The most effective parts have train or hammer periodicity and/or incorporate folk elements (such as old-style banjo) into the movement. And those work just fine.

I generally like Julia Wolfe's music. This one had ups and downs for me.

Email ThisBlogThis!Share to TwitterShare to FacebookShare to Pinterest
Labels: american modern minimal works for chamber ensemble, bang on a can, folk-song based modern music, julia wolfe steel hammer trio medieval and bang on a can all stars gapplegate classical-modern review