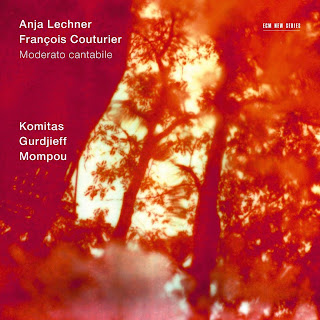 There is music that speaks with beauty and flow, sometimes more so than with structure. The structure is there, but like a building where the support beams are hidden it is less something experienced than felt. That would characterize the new album by cellist Anja Lechner and pianist Francois Couturier, Moderato cantabile (ECM New Series B0021592-02). The two were a part of the rather striking album Il Pergolese (see January 16, 2014 posting) and here launch their duo. Lechner comes out of the classical world but has a big interest in improvisation; Couturier comes from the jazz end of the spectrum, but through his arrangements and compositions leans here and elsewhere increasingly toward the classical realms.

The re-arrangements of the music give us an open quality, beautifully cantabile throughout, yet also somewhat Eastern in its sound, tonality and concern with space, partly because of the original music itself, part given the duo's creative interpretive spin.

The playing is exquisite, so evocative of a beautiful repose that it is easy to find yourself drifting with the music, letting it wash over you. The result for me was that it took me a number of listens before I started experiencing the what of the melodic specifics and their lavishly soaring accompaniment. The meditative transparency of the duo sound strikes you right away, the specific language of the works reinterpreted comes a little later.

At any rate it is music that puts you in a very nice zone. The fluidity of the duo is pretty exceptional, but like the extraordinary beauty of a beautiful landscape it first ravishes; only later do you spot out the musical landmarks and guideposts to help you in your journey forward.