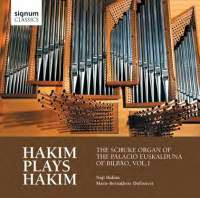 Organ music of high caliber occupies a special place in the classical repertoire. The people who know it well and listen intently to it are a group somewhat set apart from the regular stock of folks, in that they aren't as typically mainstream as the average classical aficionado. But the great organ music deserves as much attention as any of the other genres, so there is no musical reason why that is the case.

Take the music of Naji Hakim (b. 1955), for example. He studied with Jean Langlais, which puts him firmly in pedigree with the French Organ School, that begins with Franck, through to Vierne and all the way up to Messiaen. Hakim's music does indeed have a great symphonic wholeness to it that typifies the school. But judging from his first volume of his music as played on The Schuke Organ of the Palacio Euskalduna of Bilbao in the Hakim Plays Hakim series (Signum Classics 389), he also excels in scherzo-like levity at times. But at any rate it is music that needs to be heard.

The current volume contains seven compositions, several in multiple movements, the 13-part "Die Apostel" (2011) being the most unusual in that it is written for organ duet, and accordingly his partner Marie-Bernadette Dufourcet joins in with him on the recording.

All of it maintains interest via Hakim's excellent command of the forces of the modern cathedral organ, its power and its color contrasts, and his inventive writing. His short but very virtuoso-istic "Ave Maria" based on Schubert's well-known melody has definite clout. But there are other, beautifully contrasting moods represented here, from the varied "Esquisses Gregoriennes" (2006) to the majestically swirling vortex of his "Toccata" (2011).

The organ sound is spectacular, as well recorded as it is powerful, and Hakim's music sets it through its paces. The music has at times some pretty modern sounding harmonies, which puts Hakim in our time. But he also has a nice sense of the French tradition that comes out along with a certain playfulness now and again and just a touch of his Beirut heritage.

This is a volume organ enthusiasts will value. It is not avant high modernism, as you may have gleaned from my description, but it is a collection of well-constructed music from an original organ voice of importance today.