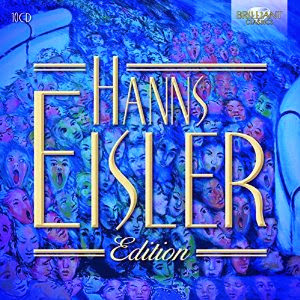 Sometimes there are historical reasons behind the obscure posterity of a composer. Certainly that was true in the case of Hanns Eisler (1898-1962), a substantially prolific, extraordinarily gifted Austrian composer, a Jew who throughout his life maintained an unswerving allegiance to left-wing politics. He studied with Schoenberg and was a most promising force in the contemporary new music scene in the Middle Europe of the pre-Nazi era. He began his career in Vienna, moved to Berlin in 1925, and like Kurt Weill, incorporated cabaret and pop elements into his music. Like Weill also he collaborated with poet-lyricist-playwright Bertolt Brecht, in Eisler's case primarily via songs and incidental music to Brechtian theater works.

With the rise of the Nazis Eisler's music was banned along with many others and he left Germany abruptly, then made various stops in Europe before coming to the US to teach at the New School in 1938. He made the treck to Hollywood in 1942, wrote scores for movies which brought him some acclaim and several Academy Award nominations. His left-wing affiliations got him in trouble in 1947, when Nixon and the HUA put him before their tribunal. He was deported and eventually spent his last years in East Berlin, where he was accepted but even then subjected to the strictures of Social Realism which prevailed during the Stalin era.

So there are reasons why Eisler's music is not well known today. Indeed some of his music has strong agit-prop qualities not likely to endear him to mainstream concert goers. Yet we manage to celebrate Weill's early theatre music nonetheless, which has strong political content inherent in Brecht's librettos.

Recordings of his music have been available here and there in the post-modern era, but nothing of the scope and breadth of the newly released Hanns Eisler Edition (Brilliant Classics 9430) a comprehensive ten-CD retrospective covering the full breath of his output. The lyrics to the vocal music are not included, but you can download them from the Brilliant site.

What we have in this set is an impressive set of recordings, many made in East Germany, nearly all very good performances. It is not the complete Eisler but it covers a great deal of his music: symphonic, chamber, songs, piano music, symphonic vocal and choral. Here and there the music is strictly agit-prop, especially some of the choral works, but never so much as to dominate.

As for the rest, it shows us a composer of exceptional talent. There are wide-eyed modernist works from his early years and even later, cabaret music that will remind pleasantly of Weill yet not reproduce him, some beautiful chamber works....There is no way to give detailed descriptions with a set of this magnitude.

I came away from listening to this all with a revelation that Eisler was a major composer whose politics kept him out of the Western rediscoveries and revivals that the music of many other Euro-exiles eventually enjoyed in later years.

Perhaps his time has come. Certainly the Brilliant set makes a case for his talent and abilities, and that at a very reasonable price. Not everything is brilliant, not surprisingly, yet there is genuine facility to be heard and appreciated throughout.

Anyone who values the historical modernists will find a good deal in this set to like. He may have been forgotten, but we can now easily get exposure to the music here and make up our minds. Recommended.