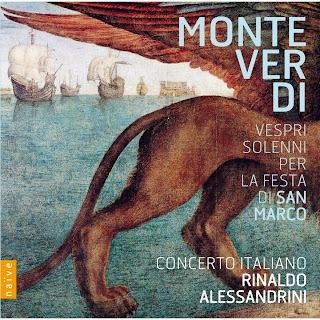 Vespri solenni per la festa di San Marco (Naive) reconstructs and celebrates a Vespers service in the Basilica of Mantova, San Marco, such as it would have been performed during Monteverdi's lifetime. This in honor of the 30th anniversary of Concerto Italiano, conducted by Rinaldo Alessandrini, one of the principal Monteverdi exponents of our era.

Alessandrini knew what such a liturgical service contained, so it was a matter of making choices from the Selva morale e spirituale collection. The recording at hand contains a complete Vespers; there are other selections that would have been possible; this choice seemed to Alessandrini a good one. Apparently he plans to record the complete "Selva" in the coming years, and this is a first step toward that.

The set comes with a bonus DVD documentary by Claudio Rufa on Alessandrini conducting Monteverdi.

Musically we have some very beautifully stirring Monteverdi done in the authentic manner.

I would heartily recommend this one for any early music enthusiast--or those wishing to explore the genre with something exemplary. It is primo Monteverdi.