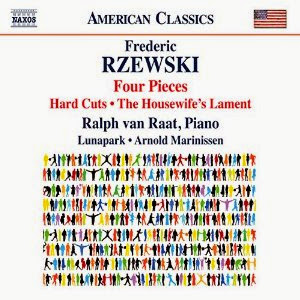 American-born Frederic Rzewski (b. 1938) has roots in improvised as well as composed music. He was a pioneering founder member of Musica Elettronica Viva (MEV) along with Richard Teitelbaum and Alvin Curran in the '60s, a cooperative ensemble that created exploratory improvisational music which spanned the gap between free jazz and new music; it also notably featured live electronics along with conventional instrumentation. They were one of the first who covered this territory and helped spawn an avant garde hybrid that continues to be important today, especially in Europe but in the USA as well.

He is a virtuoso pianist and of course a composer, initially studying with Sessions, Piston and Babbitt among others, then making his way primarily in Europe.

His piano solo compositions are especially well-known. "The People United Will Never Be Defeated" is one of the more popular, having enjoyed a fair number of recordings over the years, including one by pianist Ralph van Raat, who also is the pianist on the new release discussed here.

Four Pieces, etc. (Naxos 8.559759) features three compositions/suites covering a wide span of Rzewski's output from 1977 to 2011. "Four Pieces" (1977) finds the composer in an expressive, tumultuous mode typical of his music of that period. "Hard Cuts" (2011) is in three movements and joins pianist van Raat with the chamber ensemble Lunapark for a fascinating quasi-concerted work that has expressive chromatics joined with well-configured, continually forward moving modern harmonic transformations-modulations in an edgy mode. In the final movement "Like Bees" it turns to a bee's nest buzz of drones that builds outward to a high modernist return to open tonality.

"The Housewife's Lament" (1980) takes an anonymous, Beethovenesque tune from the mid-19th century and constructs a set of very exploratory variations around it.

It is all exemplary Rzewski, a composer never comfortable to remain in formalist high-modern expression, but ever searching for stylistic linkages with the past, the world and the future. Ralph van Raat has the technique and a temperamental affinity with Rzewski that makes each of the three works sing with energy and panache.

The volume serves as a good introduction to the composer for those who do not know him well. Rzewski afficionados will welcome the volume, too.